Teens and Alcohol Use

Alcohol is the most widely used psychoactive drug in the United States and is the substance most often abused by teenagers and young adults. Teen drinking is not a new phenomenon, but we have learned a lot about teen drinking, binge drinking, its’ impact on brain development, and addiction potential in the past few decades. We also know what factors make a teen more at risk for developing an alcohol dependency or addiction.

While only 10% of parents believe their child is drinking, over 52% of teens indicate they have had alcohol in the past month. By age 13, 12% of children have tried alcohol with the number rising to 79% by age 18. Of those 79%, over 60% of those teens report binge drinking in the past 30 days.

Teen often start drinking with beer, wine, or malt-based liquors which blend alcohol and fruit juice. Teens mistakenly believe these drinks to be safer than hard liquor. Teens usually get alcohol from parents, sibling, or relatives. Most drinking takes place at their own home or at a friend’s house.

Social and environmental factors affect the initiation of drinking alcohol more than genetic factors. These factors include

Intoxication is the feeling of drunkenness or inebriation from drinking alcohol. Intoxication happens because the liver, which metabolizes alcohol, can’t process the alcohol ingested fast enough. The liver works at a fixed rate. If the rate of alcohol consumption if faster than that fixed rate, the blood level of alcohol increases. Alcohol in the blood can cross the blood brain barrier creating the effects of intoxication.

Intoxication has nothing to do with which type of alcohol you drink; it is the amount of alcohol that a person drinks, as well as your metabolism, that determines intoxication.

A serving of alcohol is as follows:

The legal definition of intoxication is based on blood alcohol content (BAC). This level is measured in grams/210 liters of breath or grams/100ml of blood. Legal limits for BAC levels range from 0.5 to 0.09 depending on the state you live in.

In general, a BAC level will be 0.08 for a 160lb man who ingests 3 8-ounce glasses of wine over 2 hours. A 120lb woman will have a blood alcohol level of 0.13 under the same conditions. Women metabolize alcohol less efficiently than men due to less muscle mass and less total water in their body.

A BAC above zero but below 0.15 may result in the following symptoms

A BAC over 0.15 but below 0.45 will include the above but we also start to see depression, lethargy, decreased heart rate, decreased blood pressure, decreased respirations, vomiting, and pulmonary aspiration.

A BAC of over 0.45 is considered blood alcohol poisoning. This can result in stupor, coma, and death due to respiratory depression with respiratory acidosis and hypotension.

A hangover is how people describe what happens 6 to 24 hours after drinking. Symptoms include

Did you know that over 90% of alcohol consumed by people under the age of 21 is consumed by binge drinkers???

Binge drinking is classified by how many drinks it takes for a person to reach a BAC level of 0.08. For adults this is usually 5 or more drinks for a man and 4 or more drinks for a women. Because teens metabolize alcohol differently, their numbers are not the same as for adults. Remember these levels do not indicate how much alcohol is safe, it only indicates the classification for binge drinking.

Vodka is the most common alcoholic drink teens and young adults identify as using when binge drinking. Beer is only identified in less than 33% of binge drinking episodes. Youth are particularly susceptible to binge drinking because their hormones and brain development increase the feelings of euphoria caused by alcohol. They have higher rates of binge drinking versus adults with 72% of 18–20-year-old binge drinking at some point during adolescence. This is a huge problem on college campuses. Binge drinking can lead to physical illness, long term dependency or addiction and even death.

If a parent binge drinks, especially if witnessed by their child, they are much more likely to binge drink. 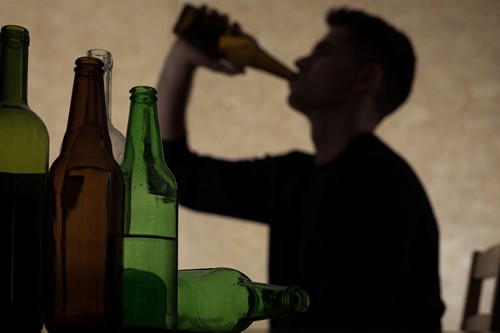 THE AFFECT OF ALCOHOL ON THE ADOLESCENT AND YOUNG ADULT BRAIN

Children and young adults are still undergoing brain changes and development. Alcohol can interrupt this development causing cognitive impairment. This impairment can actually be predicted based on a person’s cumulative alcohol use, severity of hangovers, and withdrawal symptoms after using alcohol.

Alcohol changes the developing brain. This results in increased risk of addiction and increased severity of substance abuse. Brain changes from alcohol include a decrease in the volume of the frontal lobe. This brain area controls executive function, attention, self-regulation, and impulsivity. Alcohol also affects the language areas of the brain and the areas responsible for visuo-spatial abilities. Alcohol use also affects academic performance with over 25% of college kids saying they have missed classes, fallen behind, done poorly on an exam or paper, or received low grades due to their alcohol use. Alcohol use is correlated with lower GPAs.

Blacking out is when a person experiences loss of memory for hours or days due to alcohol use. Alcohol causes poor functioning of the hippocampus, an important brain area for creating memories. Alcohol prevents it from making long term memories from short term memories or experiences. Black outs are more common in adolescents than adults with 1 in 6 teens having had a blackout. Generally, a male must ingest 8 drinks and a female 5 drinks before having a BAC level that would result in a black out. When experiencing a black out, a teen or young adult is at increased risk for engaging in high-risk behaviors.

Adolescents make bad decision when drinking alcohol that can have legal consequences. Legal consequences can include jail time, community service, or loss of their driving privileges.

Prolonged alcohol use can also result in other health effects including

Alcohol use is the cause of most injuries or deaths due to accidents, homicides, and suicides in teens. Alcohol use results in 3,500 deaths a year and almost 120,000 ER visits due to injuries or illness related to alcohol use.

Over a third of all fatal automobile accidents in 15–20-year-olds involve alcohol. Alcohol use and impaired judgement result in an increased risk of drunk driving with 5% of teens drinking have driven drunk. It also impairs decision making with over 17% of teens admitting to riding with an impaired driver.

Over 50% of all head injuries experienced by adolescents are due to alcohol use. This includes head injuries due to biking without using a helmet after drinking. Alcohol use also increase the risk of drowning.

Alcohol also lowers inhibitions and impairs thinking. This results in earlier sexual activity, increased number of sexual partners, and higher rates of teen and young adult pregnancy, sexually transmitted infections, and infertility. Alcohol is also a factor in over 50% of all cases of rape in adolescents and college age students. This is because alcohol increases sexual aggressiveness and impairs thinking.

Alcohol abuse is a chronic disease in which a person is unable to control their drinking due to physical and emotional dependence on alcohol. A teen or young adult is more likely to develop an addiction or use disorder if their parent abuses alcohol. Genetics predicts 50% of this risk and increases the risk 4 to 5 times versus people who do not have alcohol abuse in their family medical history.

Signs that your child may have a problem with alcohol include

If a child is drinking alone, this indicates they are very high-risk for developing alcohol addiction or dependence. You should aid them in seeking help immediately.

It is best to seek professional help if you believe your child is addicted to alcohol. Based on the severity of their disease they may need outpatient rehab, a partial hospitalization program, or inpatient medical management. Stopping alcohol suddenly results in withdrawal symptoms that are difficult to experience and can be risky to a person’s health. Initial withdrawal symptoms include headache, nausea, anxiety, irritability, and shaking. A person’s symptoms will worsen after the first day. On the second day, symptoms may also include disorientation and hallucination and possible seizures, particularly if their addiction is severe. The third day is generally the worst day with alcohol withdrawal delirium setting in and causing increased heart rate and body temperatures as well as seizures. Most people improve between day 4-7 but symptoms may continue, though more manageable, after this point.

After the withdrawal phase, a person who has been abusing alcohol will require long-term treatment for their addiction and any underlying issues they may have such as psychological disorders. Treatment for alcohol abuse includes individual and/or group therapy, working with a psychiatrist for medical treatment to reduce cravings, and participating in family therapy.

Talk to your kids about alcohol and the risk of alcohol abuse early and often. This is an instance where prevention is better than intervention. Once heavy drinking is established it is very hard to control.

Speak with your child about alcohol and what it does to the body. You can use real life stories of when people were hurt due to alcohol. If there is a family history of alcohol abuse, your child needs to know they have a genetic predisposition towards alcohol abuse and that they are 4 to 6 times more likely to abuse alcohol than peers without that family history.

Set a good example and drink responsibly if you choose to drink. Also avoid talking about or joking using alcohol as a means of coping. It normalizes drinking as a coping mechanism when it really isn’t a coping mechanism but an avoidance mechanism that ignores feelings and emotional health.

Do not make alcohol available to your teens and do not purchase alcohol for your child or their friends. Provide supervision when your child has friends over and make sure you know your child’s friends and their family. Set expectations and have consequences for behaviors that are not within those expectations.

Massachusetts General Hospital Addiction Recovery Management Service (ARMS) is an outpatient program for families of children and young adults aged 14-26 who have a substance abuse problems or addiction. It is a support service for parents and youth that helps you navigate treatment programs, provides education, and provides support groups.

The Massachusetts Substance Use Hotline is a public resource for finding substance use treatment and recovery services. This is a free and confidential service. The hotline number is 800-327-5050,

The Doorway is New Hampshire’s source to find addiction treatment and resources.

Parents play a big role in teaching our children about alcohol, intoxication, binge drinking, the impact of alcohol on their brain and health, and the benefits of waiting until legal age to drink alcohol. If you are worried that your child may be abusing alcohol, please discuss with your primary care provider.

Children’s Health Care of Newburyport, Massachusetts and Haverhill, Massachusetts is a pediatric healthcare practice providing care for families across the North Shore, Merrimack Valley, southern New Hampshire, and the Seacoast regions.  The Children’s Health Care team includes pediatricians and pediatric nurse practitioners who provide comprehensive pediatric health care for children, including newborns, toddlers, school aged children, adolescents, and young adults. Our child-centered and family-focused approach covers preventative and urgent care, immunizations, and specialist referrals. Our services include an on-site pediatric nutritionist, special needs care coordinator, and social workers. We also have walk-in appointments available at all of our locations for acute sick visits. Please visit chcmass.com where you will find information about our pediatric doctors, nurse practitioners, as well as our hours and services.

Disclaimer: this health information is for educational purposes only.  You, the reader, assume full responsibility for how you choose to use it.